An all-day premier endurance race slated for March 3, 2018, the Power of Four Ski Mountaineering race is designed to test the limits of any athletes brave enough to register. The course is considered the longest and most difficult course in the United States. Both elite and recreational athletes are guaranteed to be challenged – and, of course, to have fun! Skiing is, after all, the perfect intersection of  fun and fitness: work uphill, then glide down. 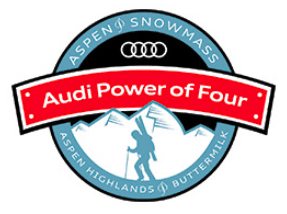 The Power of Four mountaineering endurance race debuted in 2011 as  a mountain bike endurance race, but welcomed a 50k trail race and then a skimo event that same year to complete the Triple Crown. The ski mountaineering event was initially sponsored by Helly Hansen, and sold out its field of 150 skiers the very first year.

During the elite mountaineering race, teams of two (broken into male, female, coed and vert categories) will test their endurance by skiing, hiking and skinning more than 12,000 vertical feet over 25 grueling miles. Each team will be tracked using Satellite GPS. The race will allow participants to explore four magnificent mountains of terrain: from Snowmass Village to West Buttermilk to Aspen Highlands Bowl and finally Aspen Mountain.

The Recreational Division course is called The Power of Two and covers only two of the four mountains: Aspen Highlands (including the Bowl) and Aspen Mountain. Participants will still get a workout as they cover 8,000 vertical feet over 15 miles. This is a safer

Although it can be fun, a decent aerobic base is recommended before beginning race-specific training; even the toughest and most experienced alpine athletes admit to being challenged.The mental aspect is most critical in these longer races; it’s less likely you’ll be able to “wing it” as you might a shorter event.

You’ll want to make sure you practice with your light gear, get long tours in before the event, practice towing, and absolutely get familiar with the course before race day. Make sure you’ve packed enough food so that you can keep fueling up throughout the event – but again, practice eating whatever you’ve chosen (to avoid unexpected issues) before event day!

Download the course map PDF to see the full course.

If you’re thinking of signing up, you’ll want to gather the following gear for race day:

To get into the spirit of the event (and follow participants’ training), follow #PowerOfFour on social media.